In my corner of the south, Hoppin’ John is a traditional New Year’s dish believed to bring good luck. I’m not superstitious, but some traditions, like this one appeal to me. Every year on New Year’s Day we serve Hoppin’ John, collard greens, and cornbread. Hoppin’ John is a nice, flavorful version of beans and rice and black-eyed peas don’t need to soak as long as some other varieties of dried beans.

I adapted this recipe from The Lee Bros. Southern Cookbook, one of my most favorite cookbooks, ever.

Additionally, I found the picture lurking in the depths of my external hard drive. How is that for convenient? 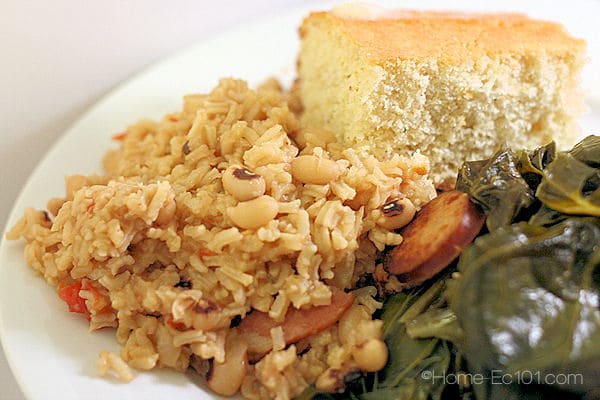 Cook the bacon in a 4 qt pot until the fat has rendered, about 5 minutes. Remove the bacon from the pan and set aside. Add the onions to the pan, cooking until soft. Add the stock, pepper (both kinds), and salt to the pot and bring to a boil, reduce the heat to a simmer.

Add the soaked black-eyed peas to the broth. Cook uncovered for 25 minutes. The stock should be simmering, stir it a couple of times. The goal isn’t to cook the peas to mush. There is still a bit more cooking to go.

While the peas are simmering, coarsely chop the bacon, and add most of it to the pot. Reserve a little to toss in at the end.

Add the rice and tomatoes to the broth and peas. Cover tightly and reduce the heat to low. The rice and peas should simmer gently for 20 minutes. Remove the pot from the heat. DO NOT UNCOVER. Let the rice and beans steam / soak up the broth for an additional five minutes.

Stir in the reserved bacon and serve.