Why would anyone want to cut up a whole chicken? It’s a useful skill to have, I tend to buy whatever is on sale and if whole chickens are on sale that week, then I load up. By buying a whole chicken, I have not restricted myself to one form of cooking or another. Additionally some people in this house are white meat fans, while others prefer the dark and good luck finding chicken breasts at a reasonable price on their own.

If you purchase whole chickens, come home and cut them up, they can be frozen in pieces. However, do not thaw the chicken, cut it up, and refreeze. That’s a big no on the safety meter.

As some readers of Home Ec 101 are vegetarian and others read their feeds first thing in the morning, I’m putting a cut, just so no one is surprised with pictures of raw chicken. You’re welcome.

Also, give my stepdaughter a big round of applause, she was a trooper and helped me take the pictures for this tutorial. It’s not every teen who’s willing to hang out with their stepmother over a chicken carcass, you know.

Disclaimer: I always use a cutting board, but for these pictures I wanted the chicken to show up against a darker background, so I put down a piece of wax paper. Don’t worry, I sanitized my work surface both before and after working with the chicken. Use a cutting board and be sure to sanitize it and your knife after use.

When purchasing poultry look for the grade stamp on the outside of the package, anything below Grade A is used by canners and processors. Can you say mechanically separated?

Remove the packaging, rinse the bird and remove the giblets and neck from the cavity.

Usually I only reserve the neck and give the rest to the dog, but that’s a whatever floats your boat decision.

Cut away the fat at the opening of the cavity, it just gets in the way later.

Cut through the skin connecting the leg to the body, this makes the thigh joint easier to locate.

Hold the body of the chicken in place with one hand and grasp the leg in the other. Twist the leg up and out of the joint, dislocating the hip. This gives you a place to cut the leg and thigh away from the chicken.

To separate the thigh from the leg, grasp the thigh in one hand and the leg in the other and dislocate the knee.

Then cut through the joint.

Then repeat these steps on the other side before moving on to the wings.

Grab the body of the chicken in one hand and the upper part of the wing in the other and twist away from the body. Cut through the shoulder joint.

Then separate the drumette from the rest of the wing, by dislocating the elbow and cutting through that joint.

If you’d like, separate the wing tip from the wing, in the same manner. I use the wingtips for chicken stock.

Repeat on the other side. (Sense a theme there?)

Grasp the back of the chicken firmly below the tail (the chicken should be upside down). Cut straight down through the ribs to mostly separate the back from the breast of the chicken.  This will have to be done on both sides.

Cut through both shoulders.

The back and breast are now separate. I save the back for stock. There is some meat on it and the the portion just under the shoulder blades are referred to as the oysters of the chicken and are a prized cut. However, they are small and one chicken only has two. Just don’t miss these when you roast a whole chicken. 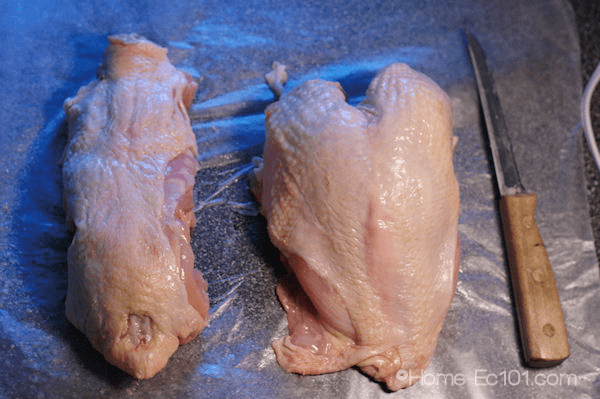 I use a utility knife during almost the whole process, but for these last two cuts, I switch to my large chef knife as it takes a little bit of strength to accomplish it.

Cut through the sternum to split the chicken breasts. You may need to flip the bird over and finish cutting through the skin.

And there you have, one completely cut up chicken. Due to space, I only put one leg and one wing in the picture. Unless your chicken is mutant (and why would you eat that) you’ll have more parts.

It will take a little practice to feel confident in this skill, but once you have the knack it will get much faster.  Your first experience will be messy and clumsy, but hang in there; a few dinners down the line and you’ll tear that chicken up in no time.

Don’t forget to use the back, wing tips, and neck in chicken stock, just use the same proportions as I do in this turkey stock.

34 thoughts on “How to Cut Up a Whole Chicken, a Knife Skills Tutorial”