Heather says: I’m out of town, getting my geek on at a the Type-A Mom Blog Conference. Patrick Stuckart, an excellent photographer and all around cool guy (don’t let him say otherwise), volunteered to write this post on his meringue making adventure. As I occasionally try to engage the brain cells I still have, I immediately took him up on the offer. Enjoy!

Pat says:
When normal people make key lime pies they toss out the egg whites because they’re not a part of the recipe. You’re not likely to find a recipe for Key Lime Meringue Pie. Lemon Meringue Pie certainly, but not Key Lime Meringue Pie. I think the lemon pie recipe people have put some sort of restraining order on the key lime pie recipe people. It’s like Burger King can have a Whopper, but McDonalds can’t. Poor key lime pie maker people have to resort to frilly whipped cream glob thingies and a thin lime slice split and twisted in a clever artsy design. Personally I think that twisted slice looks like a bicycle wheel after a particularly nasty crash.

One day after having thrown away yet another batch of egg whites in accordance with the laws of key lime pie making I decided to go rogue and look into this whole meringue myth, without the knowledge or consent of the lemon meringue pie maker people. I figured if egg whites were the primary ingredient there was a possibility I might already have the other ingredients necessary or have access to their whereabouts. I looked in one of my mother-in-law’s cookbooks and found what I was looking for. I was looking at a cookbook printed in 1950 (Betty Crocker’s Picture Cook Book, yes, “Picture”), so although the 3 ingredients were readily available, the implements of construction were not. The image in the book showed a hand mixer in use. Not an electric hand mixer, a mixer with a handle you turn with your hand. That contraption had more meshing gears than a drawbridge. I was pretty sure we didn’t have one of those lying about and decided I would bust the mold and go electric. Like I said, the ingredients were simple enough; Egg whites, sugar and cream of tartar. And the process of combining the ingredients seemed innocuous as well. You mix the stuff together until you get white fluffy meringue. Even in 1950 the whole thing from beginning to end only took up one page, and that included 5 pictures.

The result of my first attempt was less than fluffy white meringue. It was white, it was meringue by virtue of its ingredients, but it was far from fluffy. I had managed to whip up what looked like a batch of Milk of Magnesia. It was even thinner than the pie mix. I thought I had followed the directions as indicated in Betty Crocker’s Picture Cook Book, but apparently something had changed between 1950 and 2000. My immediate thought was that meringue can only be made by using actual hand mixers, that electric mixers were too violent and noisy for the fragile sensibilities of egg whites and cream of tartar. I kept trying and kept getting similar results. One day I decided to take the proverbial gloves off and just beat the hell out of it and see what happened. It was definitely more meringue-y, but still not a match to the photo in the book. One day, while waiting for the local news to come on TV I caught the end of Rachel Ray and whatever she was making involved meringue. She pulled a bowl out from under the counter and there it was in all its thick creamy white fluffiness. That did it. I was going to find out the secret even if I had to sneak in to the headquarters of the lemon meringue pie maker people and steal it.

I started researching meringue recipes in earnest on the Internet. One thing became immediately clear; I needed to start using glass bowls exclusively. Apparently plastic bowls contain oils that have an effect on the process preventing the fluffy from happening. I also learned that even trace amounts of yolk in the egg white could affect the outcome. I was pretty sure I was only getting white from the separation because my wife had gotten me one of those nifty little egg separators that were way better than trying to separate them using only the shells. Although using only the shells does convey a sense of Zen awareness of becoming one with the egg. But it can be a messy Zen awareness where you end up with more egg on the counter than in the bowl. The last and most intriguing aspect of meringue making was the issue of egg temperature. Most of the sources I read were promoting the room temperature approach to egg whites. So I now had a new understanding to making meringue. I now understood that baking is a lot like chemistry class. The process goes a lot deeper than just throwing ingredients into a bowl.

Even after all the research and newfound knowledge I just couldn’t get the stuff to fluff. I was beginning to think that being left handed was part of the problem. Then last week I took another shot at the Internet and found a recipe with a little different take on the mixing part, which up ‘til then had just been assumed to be “turn it on, mix it up, turn it off”. And the real key to putting this all together came on a quiet Sunday morning recently when I was visiting with my Niece in Idaho via Skype. I was bemoaning the fact that my meringue was a failure. The conversation arose after she was telling me about her husband the pilot-hockey player-snow boarder-skier-skydiver-hunter-fisher-camper he-man. I was explaining that even though I really like him we were a little different when it came to leisure pursuits. Anyway, I was mentioning about the room temperature eggs when she suggested I try using them right out of the refrigerator while they were still cold. She said she suspected that the humidity in South Carolina may be having an effect on the process. I told her that it made a lot of sense and that I’d give it a try.

It’s taken me almost 1,000 words to get to the point. I’m Irish, it’s how I roll. Here’s the point; I finally got the meringue to do what it was supposed to do all the other times. All the other times were close, but just about 3 jelly beans shy of an Easter basket. Here’s the key lime pie I made today, and in keeping with the tradition of Betty Crocker’s Picture Cook Book (1950), with pictures.

The key lime pie is almost embarrassing in its simplicity. Very few ingredients and little or no preparation. You don’t even need a mixer (but it helps).

Now, here are 2 secret ingredients that I have since added to the recipe only because I can’t leave well enough alone. I add a sprinkling of sugar cinnamon on the bottom of the pie shell before adding the mix. I also put in one heaping teaspoon of honey into the mix itself. You don’t have to do this to get a good pie, but try it and see if you like it.

Mix the ingredients up; pour them into the pie shell and toss it into the oven pre-heated to 350° for about 12 minutes.

Making the meringue should be started while the key lime pie is in the oven. I like to give the pie a good 12 minute head-start so I can put the meringue on while it’s hot, and then finishing cooking the pie while the meringue is on top.

The glass bowl containing the egg whites should contain only the egg whites. And it really should be a clean glass bowl. For some reason egg whites tend to get a little cranky and refuse to play nice when they don’t like their surroundings. A little overly sensitive to that whole pristine environment if you ask me. I took the eggs right out of the refrigerator, separated them and after making the pie stuff went right to the meringue. The whites were still cool.

Mix this up at medium speed until you get a good head on it. You’ll know when it’s ready for the cream of tartar when it stops looking like a bowl of egg whites and starts looking like the top of a beer mug.

Once the whites go all foamy on you add ¼ tsp of cream of tartar. Just sprinkle it in on top of the foam and get ready to bring on the noise.

Now, here’s the fun part. Start mixing the whites at medium speed for a minute or so, and then give it the gas. Add about a tbsp of sugar and let ‘er rip. Mix the sugar in at high speed until you’re fairly sure it’s dissolved and then add more sugar and whip it, whip it good. Keep whipping the mix and adding the sugar. If all goes according to plan (and we all know what happens when you say that) the meringue will start appearing right before your eyes. The stuff will get positively goofy with fluffiness. And thick. You’ll start feeling the beaters drag as the meringue thickens up. All this may take from 10-15 minutes, so be patient. If you whip it, it will fluff.

Bringing it All Together

While you’re beating the daylights out of your egg whites the timer on the oven has probably gone off and you didn’t hear it. Take the pie out of the oven and while it’s still hot put the meringue on the pie. With 4 egg whites you’re going to have a lot of meringue. Spread it on all over the top of the pie paying particularly attention to the edges of the shell. The meringue will shrink a little as it cools so you want to make sure you have the edges covered so no slips are showing. You can get as creative as you want when it comes to sculpting the meringue. Since you’ve made it perfectly it will be nice and thick and easy to mold. I use a big serving spoon with holes in it to help create nice big peaks. You may be the swirly, swoopy kind of meringue sculptor, so just knock yourself out. 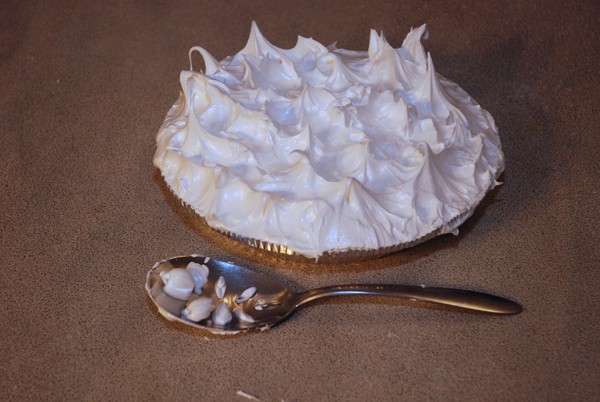 Put the pie back in the oven and cook it for another 15 minutes. When the timer goes off on the oven turn the oven off, open the door a little and keep the pie in there as the oven cools to complete the baking process for both the pie and the meringue. After about 20 minutes take the pie out and let it finish cooling on the counter/mantelpiece/chiffonier/welding bench or whatever you normally use to cool baked goods. After a while you can then place it in the refrigerator to cool for about 2 hours. Of course you can ignore all this cooling and chilling foolishness and just snatch it out of the oven and dig in. You probably won’t like it, but you can do it.

So there you have it, my method of madness when it comes to not only making key lime pie, but adding blasphemy to insolence by invading the sacred domain of the lemon pie maker people and putting meringue on it. And not just meringue. I’m talking uber fluffy meringue.

Pat Stuckart can be found wielding his camera in the Lowcountry of South Carolina.

Be sure to check out PatStuckartPhotography.com