Bobbie says:
Now is the perfect time of year for hearty soups to warm the body and spirit. Served with bread (homemade or from the store) and perhaps a salad, this thick, creamy soup makes a great lunch or light supper, and pea soup is surprisingly easy to make from scratch.

Once upon a time, I was told that if I could come up with my own version of the pea soup in the red and white can that my husband liked so much, we could stop paying that ridiculous price, which back in 1986, was just over one dollar per 10.75 oz can of condensed soup. CHALLENGE ACCEPTED!

Not just any split pea soup recipe would do, as I quickly came to realize – he said they didn’t taste right (which, it turned out, was the flavor of ham, which was NOT in the canned version) or they “had stuff in them” (he liked the smoothness of the Green Pea variety, so No Chunks Allowed). So, after examining labels on soup cans, and a few years of trial and error, this is How I Make Pea Soup. (And now, my husband can’t stand the canned version. Ha, Campbells! I WIN.) 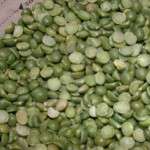 When buying dried beans or peas, always look them over carefully, even if they seem to be very clean. When I made this batch of soup, the peas I bought were very nice and clean looking, but I found a small rock amongst them. Not something you want to find on your soup spoon.

You’ll notice that my recipe calls for bouillon. I think this is the only recipe I actually use bouillon for, because generally it makes things too salty, but the chicken flavor bouillon gave this what it needed, and the result is still less salty than the canned soup. I’m also quite picky in choosing a brand. Most I’ve seen have MSG (monosodium glutamate) listed among the ingredients, which I really try to avoid. Herb-Ox is the brand I’ve bought for years, but I’ve recently tried one called Better than Bouillon, which I found at a health-food store, and I quite like it, but it’s more expensive and must be refrigerated. If you prefer, you may use chicken stock (or veggie stock, of course) instead of the water. If you do, leave out or reduce the bouillon, and perhaps add some salt to taste.

*I soak my dried peas and beans about 24 hours, sometimes longer, changing the water once or twice, depending on how long they’re soaking. After that I rinse them well – I NEVER cook them in the soaking water. Whatever any authority on the subject may say about the benefits or lack of them in this process, I know what works for me. After undergoing non-optional surgery on my digestive system several years ago, I am especially sensitive to the well-known effects of legumes on said system. I know from experience that this process makes them more…let’s say “manageable” for me.

Bobbie Laughman is an elder caregiver, freelance writer and seller of things. She lives and cooks and Does Not Bake Much in Gettysburg, PA. Have a question you’d like Bobbie to answer? Just want to say howdy? Send it to Bobbie@Home-Ec101.com.