Yesterday when I wrote the post on how to cook with dried beans, I had that nagging feeling, you know the one that says I was forgetting something important. It turns out I was, I edited it into yesterday’s post, but I wanted to be sure everyone saw the update.

Unless you are willing to boil soaked, red kidney beans for 10 minutes prior to placing in the slow cooker or Crock Pot™ in fresh water, it’s best to just use the stove. Kidney beans contain a toxin called Phytohaemagglutinin, add that to your spelling list, kids. Other beans such as white kidney contain the same toxin, but in lesser amounts.

So what does this phyto-whatchmacallit toxin do? Is it like the “toxins”-scare quotes, FTW!- you supposedly lose when fasting or sweating?

Read that as: You won’t know which way to face the toilet. That’s not a happy feeling folks. Avoid it.

How do people come in contact with this bug?

Sometimes people try using raw, soaked kidney beans in salads like 3 bean salad. The high temperature of the canning process is enough to destroy the toxin which is why commercially canned 3 Bean Salad isn’t a risk.

Other times people consume partially cooked red kidney beans, which is far worse. There is an interesting phenomena with phytohaemagglutinin and slow cookers / Crock Pots™. The potency of the toxin in kidney beans can actually increase by 5x if the beans are heated only to 80°C or 176°F¹. When you simmer on the stove, the temperature is 185°F – 205°F or 85°C – 96°C and it’s quite easy to turn the stove up a little for ten minutes after the beans have begun to soften.

If you must use your slow cooker, adjust the recipe to accommodate canned or thoroughly cooked kidney beans.

Soaking for at least 5 hours, discarding the water, and boiling in fresh, clean water for at least 10 minutes, before using a slow cooker.

FYI: The toxin is also found white kidney beans at about 1/3rd the concentration and broad beans at about 5 to 10%. Use your common sense with these beans, too. 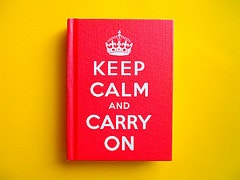 The literature I read only mentioned a few outbreaks in the late 70s in the UK and only anecdotal evidence in the US. But keep this in mind. Most people in gastric distress wait a day before going to the doctor -who really couldn’t do much except administer fluids and run up large bills with testing. Typically the effects of the toxin typically clear up in 3 to 4 hours after the symptoms start, which start 1 – 3 hours after eating. It is likely that accidental poisonings happen and are under-reported due to blame on the stomach flu or “it’s just a bug.” Remember this bug is avoidable.

My work here is done.

Keep calm and carry on.

Send your domestic questions to helpme@home-ec101.com.

¹FTW, for those who don’t immerse themselves in Internet culture means For the Win. My husband is prior service, he was in the Navy and they had the initials FTN on many things. It wasn’t a happy phrase, (expletive deleted) the Navy. I thought FTW meant (expletive) the world. “It’s 5 o’clock, I’m clocking out and going home, FTW!” has very different meanings, depending on the interpretation you use. I was very relieved when I learned the actual acronym, people weren’t half as bitter as I thought.