Would you post about how you cook cabbage? That’s something I never cook… is it cheap and healthy? Thanks!

Cravin’ the Cruciferous
Heather says:
Yes, cabbage when purchased in season, is both cheap and healthy. It is a great source of both vitamin C and fiber. Here in North America many peope associated cabbage with a funky smell that emanates when it is boiled. The good news is there are other ways to cook this vegetable that don’t release quite as much odor. I prefer to briefly steam / sauté this veggie which cuts down on the funk.

While you prep the cabbage heat the butter, oil, or bacon grease in a large skillet that has a tight fitting lid.

Wash the head of cabbage and remove the loose outermost leaves as these may have a bitter flavor.

With a large knife cut the head in half and remove the core. At this point, I cut each half into quarters and reserve one or two for other dishes (such as stir fry or tossed salad). Cut the quarters into bite size pieces.

Pile the cabbage into the pan. 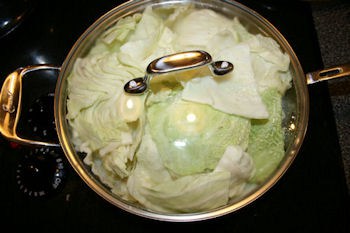 Cover tightly, as cabbage contains a lot of water and will steam itself. Once the cabbage has reduced somewhat in volume (so you don’t spill it everywhere) toss it with a pair of tongs to spread the butter or oil evenly. Cook over medium heat until tender. Salt and pepper to taste.